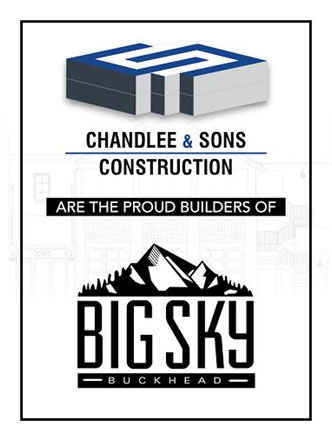 Seth Chandlee, owner of Chandlee Construction, celebrated with the owners of BIG SKY BUCKHEAD at the soft opening in late February 2014.

Chandlee Construction Company was chosen as the choice contractor for this new project in the fall of 2013. Seth Chandlee, and his partner and father, Jim Chandlee, delivered more than expected on this very hands-on project.

The project began with the demolition of an existing building on the site and ended with the erection a beautiful, two-story structure made of stone, steel, glass and wood that fulfilled the owners’ vision of an open, light-flooded, mountain-theme venue never before seen in Buckhead – the premier dining and shopping area of north Atlanta.

Seth and his crews met every challenge including the ice storm of the decade that hit Atlanta just as the project was finishing up in late January. The design included lots of hand crafted finishes including stacked stone, huge glass garage-type doors, hand painted murals and the use of reclaimed woods in several applications.