Chandlee & Sons Construction Strikes a Blow for Progress on the Beltline 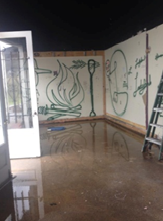 Chandlee Construction Construction began demolition in the interior of an existing building located in the “Neighborhood of the Year” – the Old Fourth Ward area of east Atlanta. This is the first stage in the conversion of this former factory into the modern Lady Bird Restaurant and Beer Garden.

On Friday, March 27, 2014, Chandlee Construction began removing debris from this old factory. The outside space will easily transform into garden areas with seating and convenient parking.

The interior has tall ceilings with windows placed high on the walls that allow light to fill the rooms. The building is located at 684 John Wesley Dobbs Avenue in Subarea Five of the Beltline, near the Eastside Trail which will soon connect to the twelve acre Gateway Park according to the city’s plan.

Chandlee Construction recently completed another restaurant and bar, the two-story, rustic Big Sky Buckhead – a ground-up construction project off of Roswell Road in Atlanta. Prior to this project Chandlee Construction remodeled the flagship restaurant of Hank Cheatham’s franchise, Stuffed Burger, in Athens, Georgia. And in early 2013, Chandlee and Sons was chosen from all of the Atlanta contractors by the producers of the Spike TV show, Bar Rescue, to perform a thirty-six hour interior and exterior renovation of a bar in Tucker, Georgia.

Seth Chandlee, co-owner of Chandlee Construction Construction, recently posted on his company’s Facebook page “Do you want to see a HUGE transformation, watch this deal!! The architects at Flags of Origin have designed a swanky eco-green product. We are so excited to be a part of this historic revitalization project in Atlanta, Georgia – reported to be one of the most unique of its kind. So here we go!!”