Friday, February 1, 2013 – Charlie Frattini and Tanya Memme, hosts of A&E’s Sell This House: Extreme, were featured on Atlanta’s The Regular Guys radio talk show on 100.5 FM. During the segment Charlie and Tanya were given the opportunity to talk about the contracting firms they use on the show. When the A&E team comes into a metropolitan area to remodel specifically chosen houses, they must choose a local contractor. Chandlee Construction Company was chosen by the A&E team for two homes to be remodeled in the Atlanta area. Charlie and Tanya state on this radio segment (February 1, 2013, #5) that the show is extreme because the demolition and remodel occurs in 3-1/2 days and that the schedule is extreme – literally to the minute. When the radio host questions the quality of the workmanship of the hired contractor Charlie states that Chandlee Construction is the “best outfit in Atlanta” and “the best he has ever used” and that “they are even better than the schedule”. To hear the entire interview go to www.theregularguys.com and chose “podcasts” from the menu tab and just scroll down until you see February 1, 2013 Sell This House: Extreme. 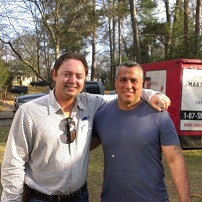