Chandlee and Sons Construction Company partner, Jim Chandlee, forged a new relationship with the founders of BALDINO’S GIANT JERSEY SUB SANDWICH SHOP through the signing of a contract on May 21, 2015. This store is located in the Windward Way shopping center at 12890 State Highway 9 in Milton, Georgia near the intersection of Windward Parkway.

Demolition began within the space on Tuesday, May 26. The crew removed all of the materials left behind by the former occupant including all of the dividing walls and surface finishes. By the following day the demolition work was complete.

The Chandlee crew moved forward with the new construction. A rear door was cut into the CMU wall and the electricians began cleaning up all of the old electrical wiring and re-wiring the wall outlets. New interior walls will be constructed to divide the dining space in the front from the kitchen and other service spaces that will fill the back half of the space. See Baldino’s plans featured below and under the Concept Tab in the Menu bar for the details of the design.

Our work passed the underground plumbing inspection and the concrete was pouredon June 17. The next day the crew began the framing and eight days later the rough in of the HVAC and plumbing were complete, the framing was up, and we waited for the inspection to hang drywall.

Seth Chandlee, CEO of Chandlee Holdings and Founding Partner of Chandlee and Sons Construction, commented on July 20, “Subs SO big, this camera wasn’t big enough – Alpharetta’s first Baldino’s! The Grand Opening is in two weeks. Enjoy!” By the week of July 28 the project was almost ready to turn over. The floors were completed and as was most of the kitchen work. The owner was supplying the kitchen equipment – there were six or seven more pieces scheduled to arrive for the installation. The decorative lighting was on order and soon to arrive. The only delay was the gas supply line. Another restaurant at the far end of the center maxed out the supply line. We were fifteen days out waiting on the gas contractor to lay a new line (that may have to go over the roof of the entire center) and for the gas provider to upgrade the meter. This was our only delay.

This Milton location has a very open design and lots of natural light with two exterior walls of windows. The interior shows differently now that the custom lighting has been installed. The furniture is arriving soon and there will be a mural wall and menu signage.

On July 30 Seth commented, “Come on finish line. We were so close to the Certificate of Occupancy when we discovered the strip center had maxed out its gas service. Therefore, the installed had to run a line from the other end of the center, across the roof to accommodate the acute BTU load – for the one stove Baldino’s must have. Then we had to get the gas service provider to install a meter. That is the construction business!”

The electricians were making the last additions to the lighting in the dining area by August 6. The kitchen equipment was already in place and the Chandlee crew was preparing for the final inspection tomorrow, Friday, by cleaning all the surfaces. In the afternoon the client’s crew came in with the tables and all of the brown paper was removed from the windows for all to see inside.

“The owner of this store received the Certificate of Occupancy on August 13 from the City of Milton. He is probably the youngest owner of a franchise in the US. He is super intelligent, educated and well-focused. Rish convinced the original founder to let him resurrect the brand and take it over via a growth expansion program. An amazing story – like Polaris has done with Indian Motorcycles. You never know what can happen when you take as risk and ask,” said Seth. 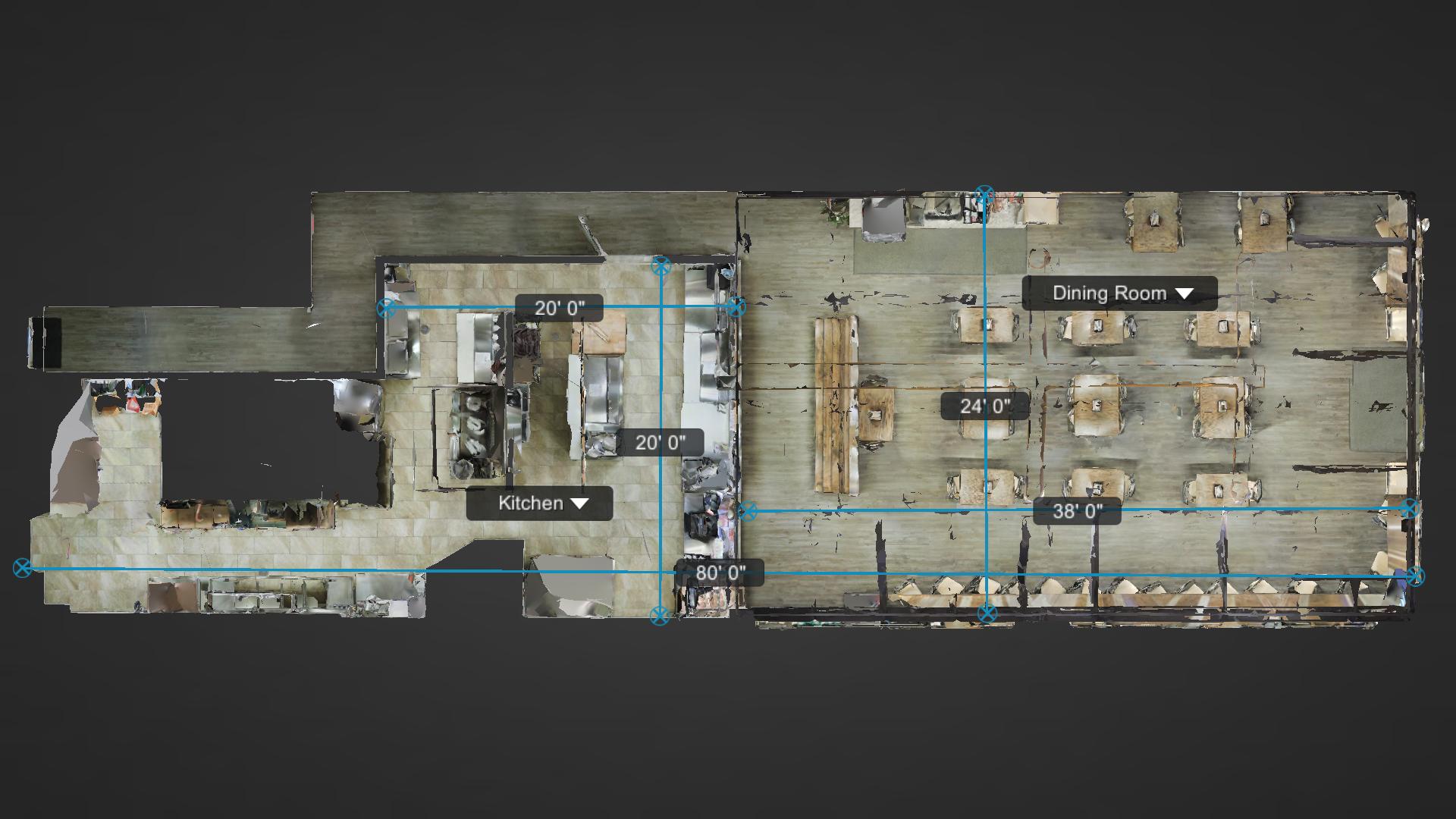 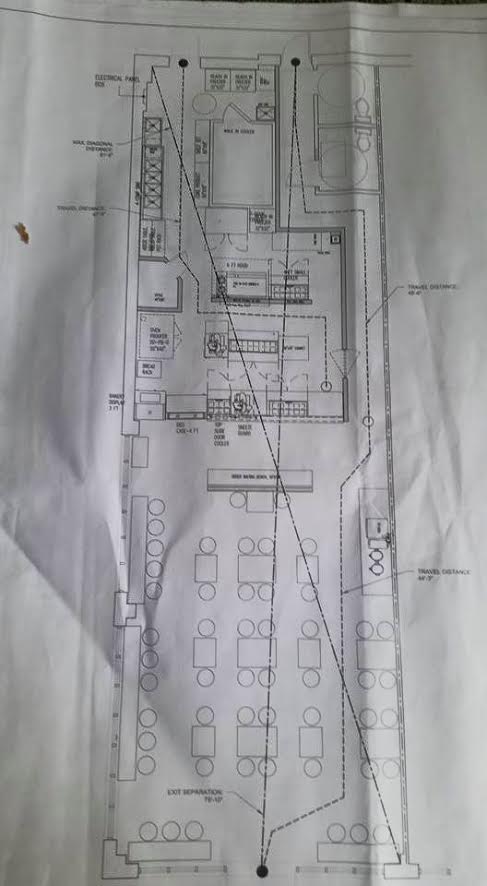 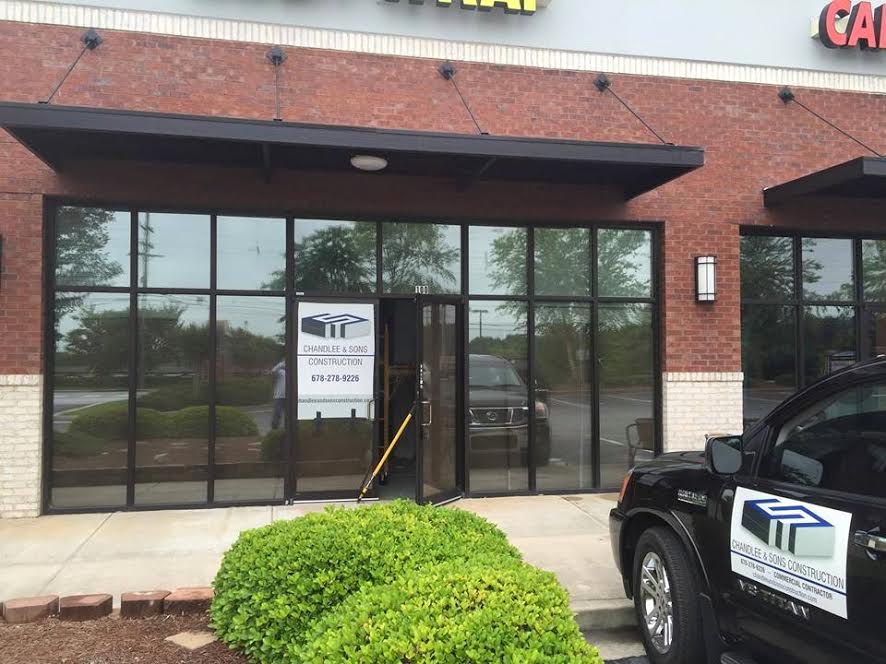 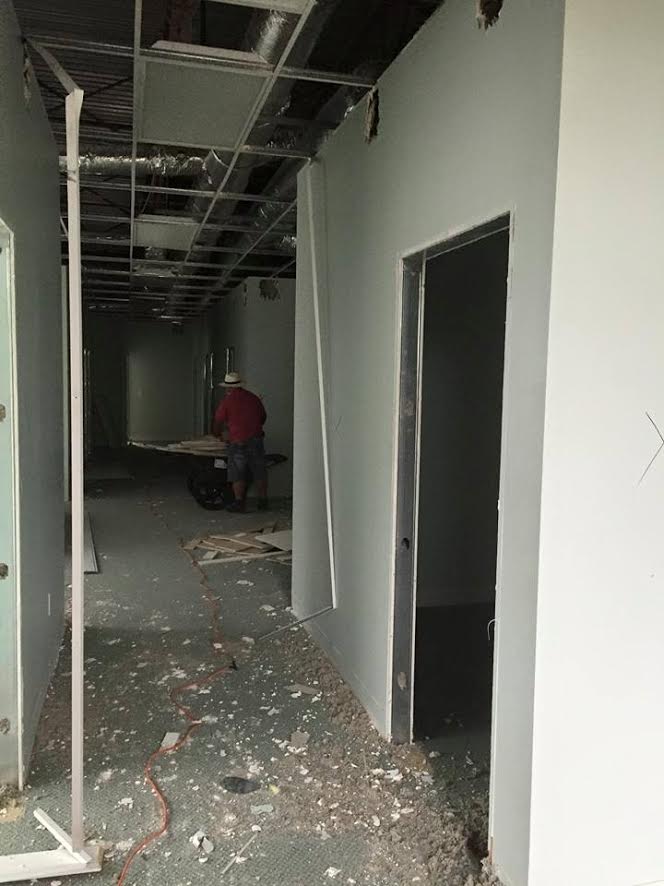 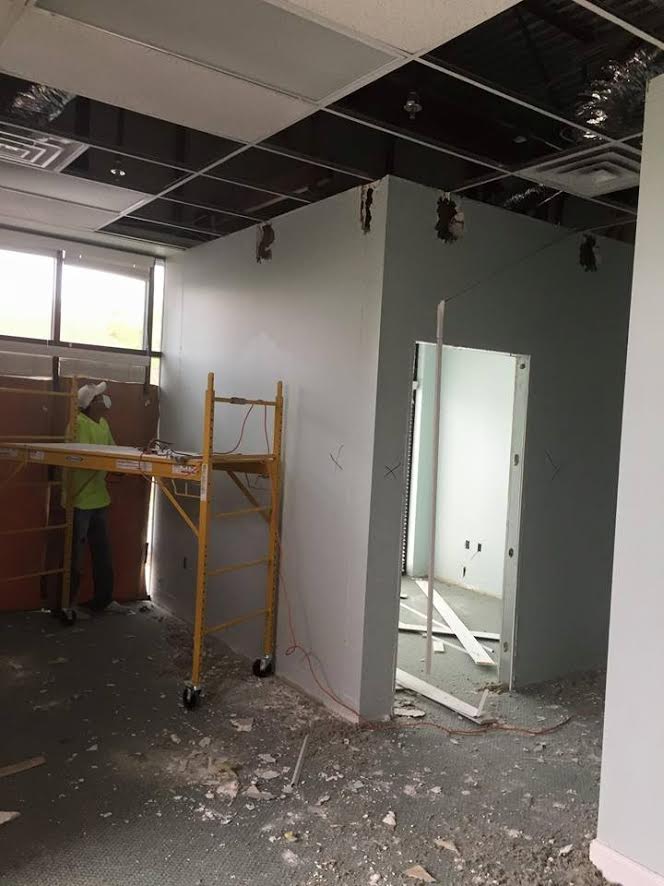 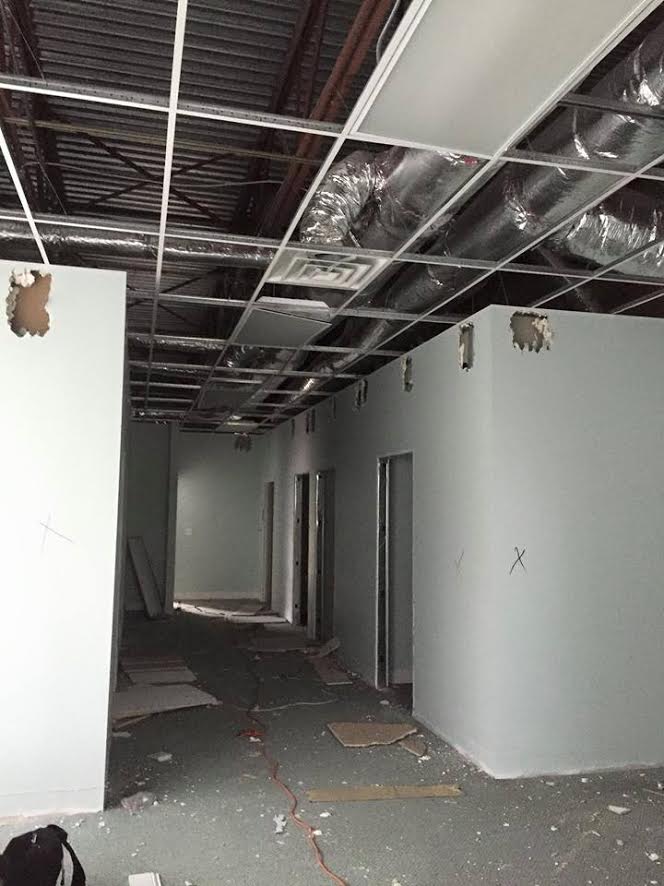 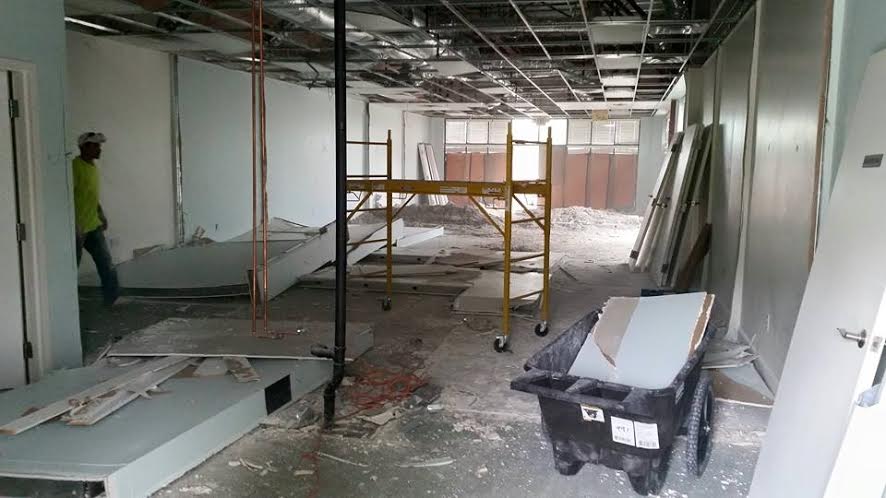 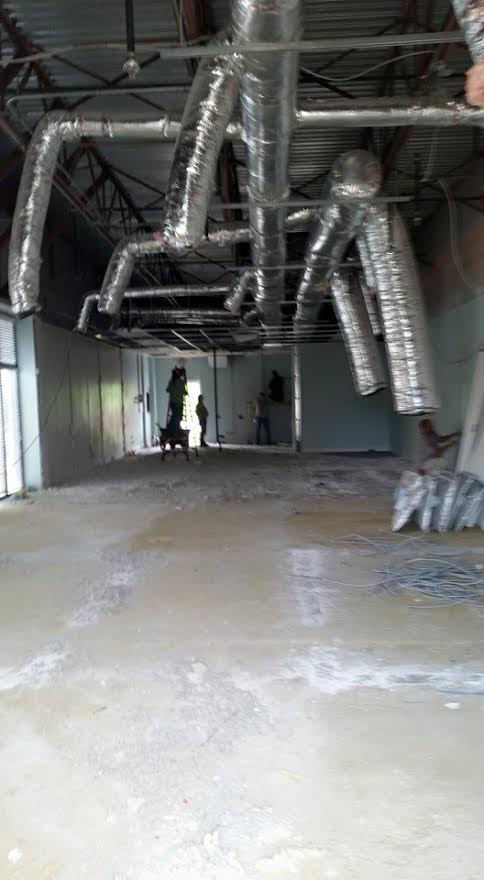 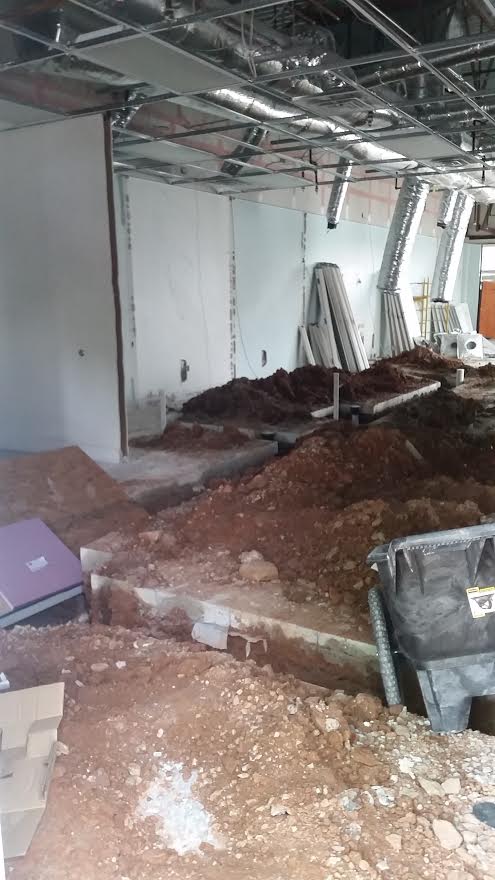 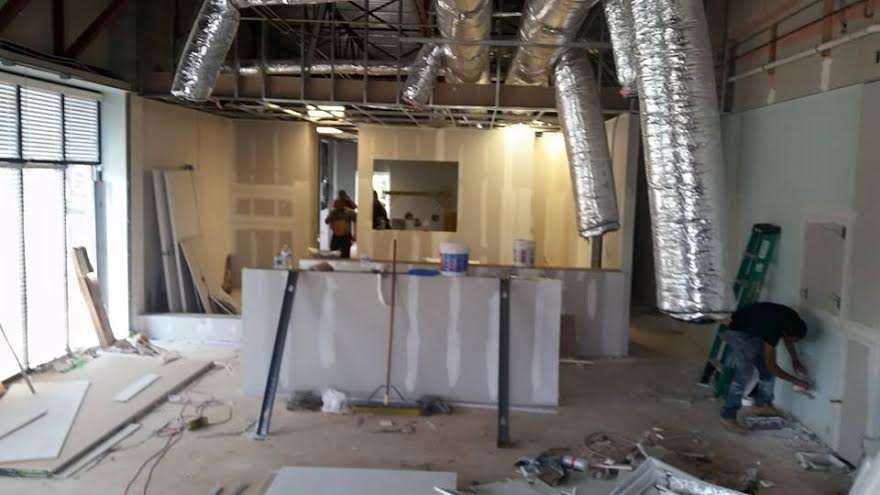 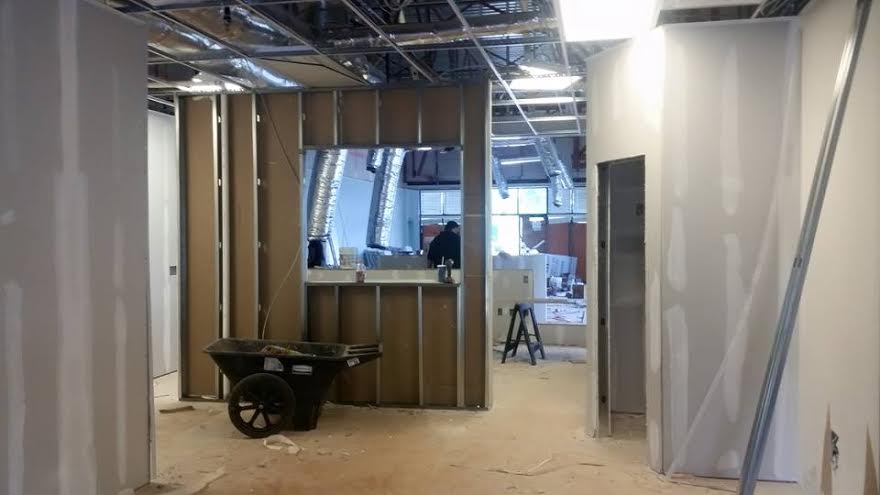 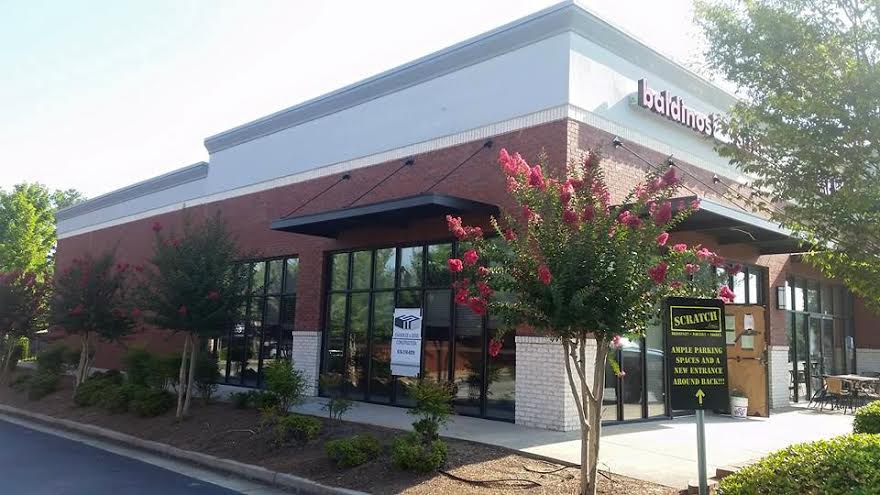 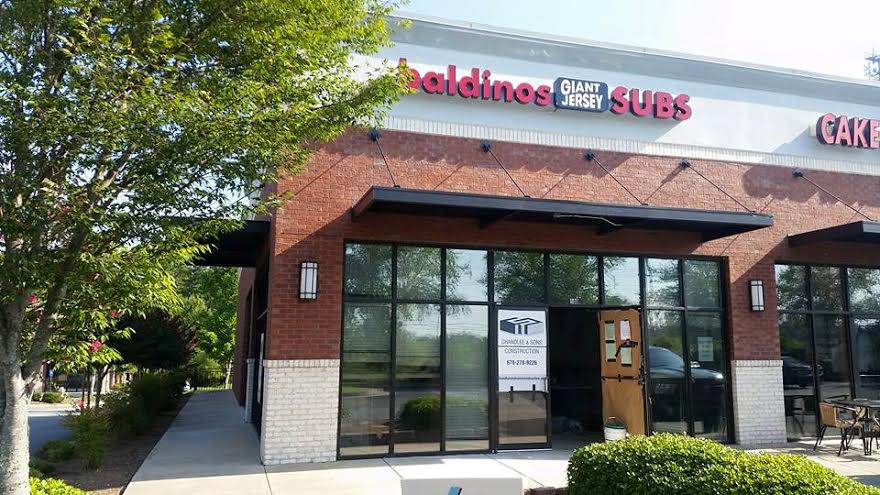 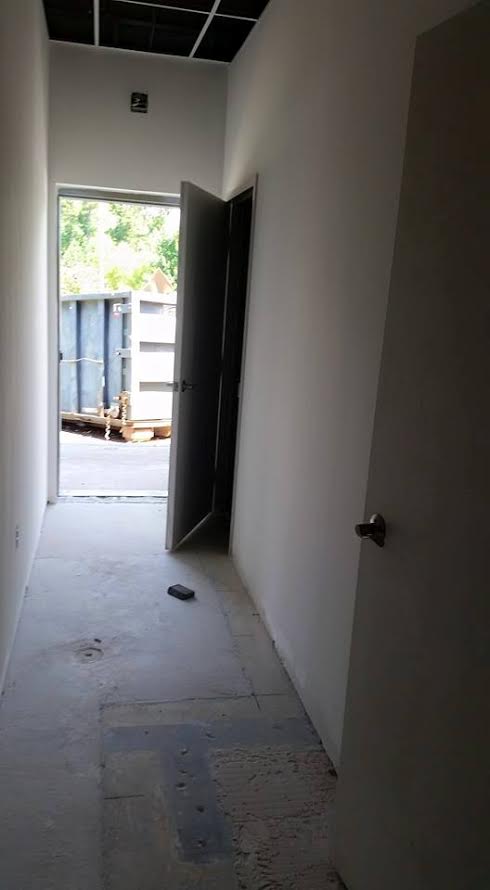 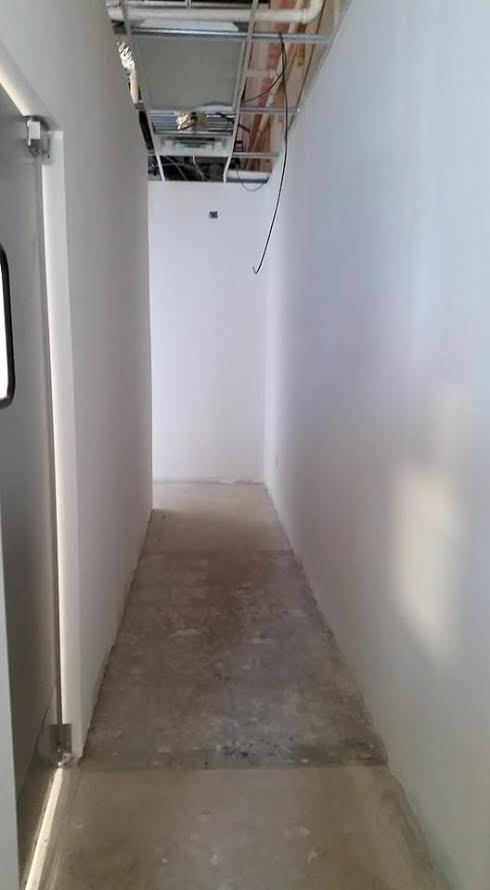 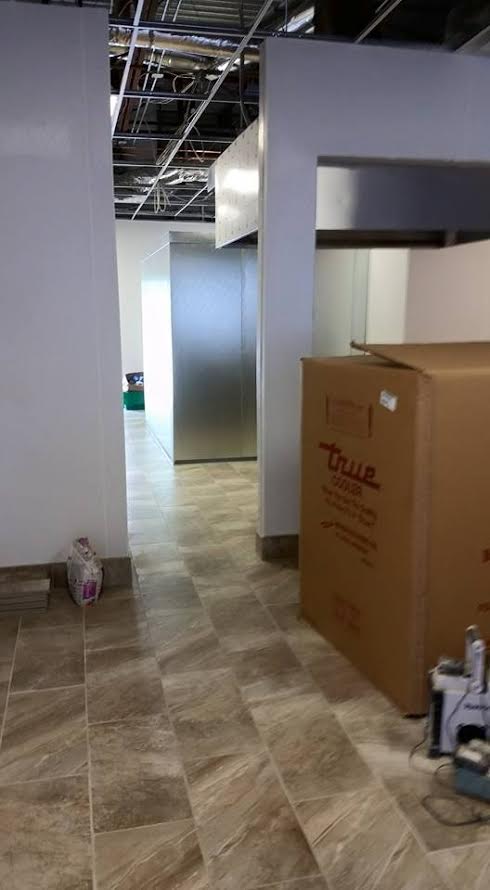 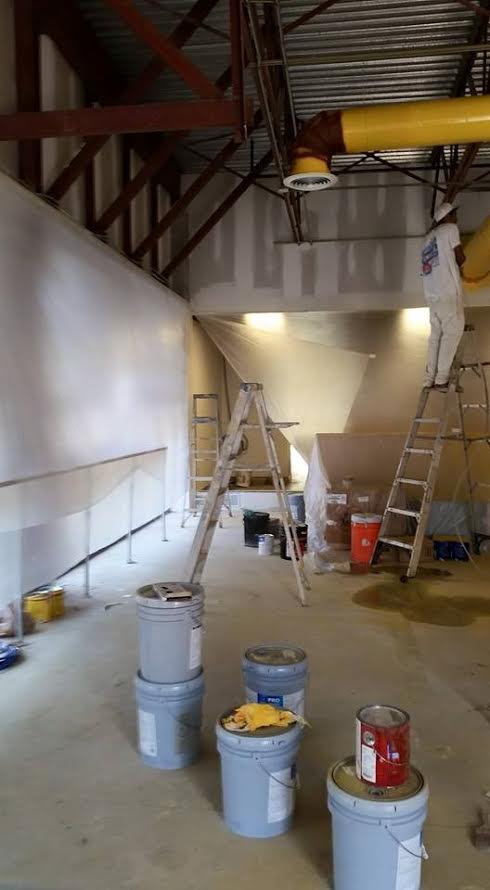 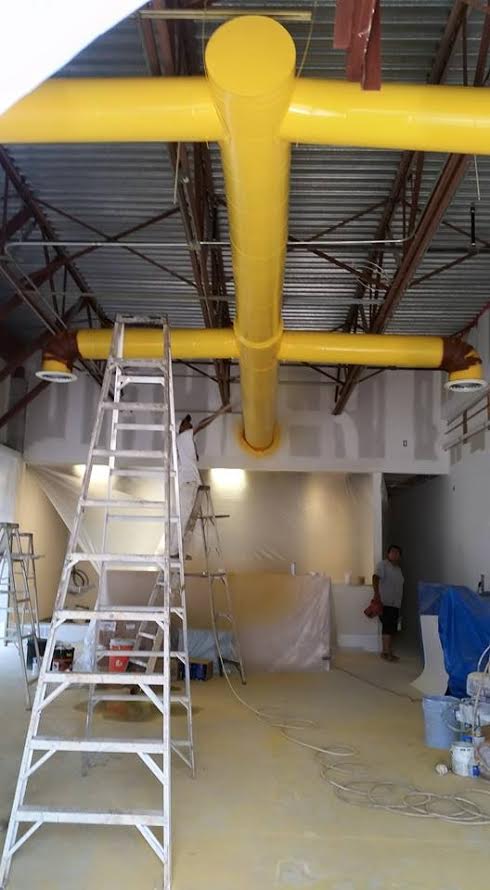 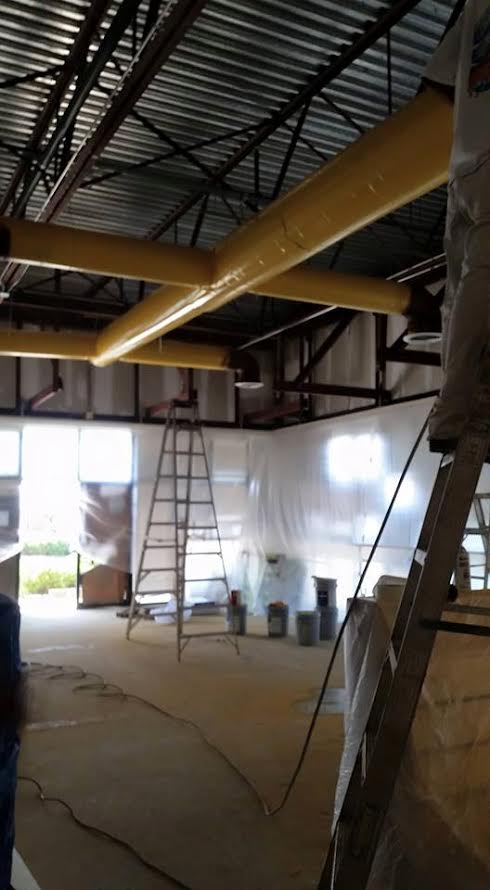 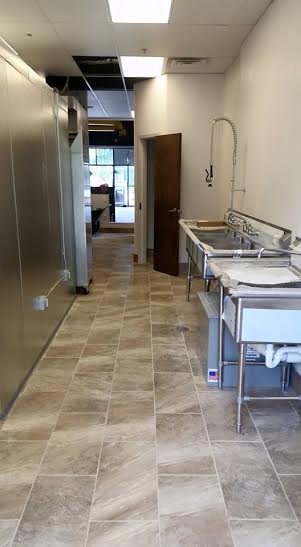 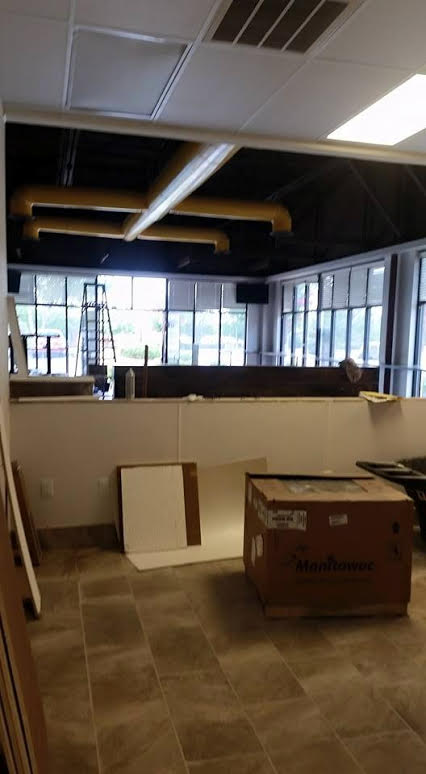 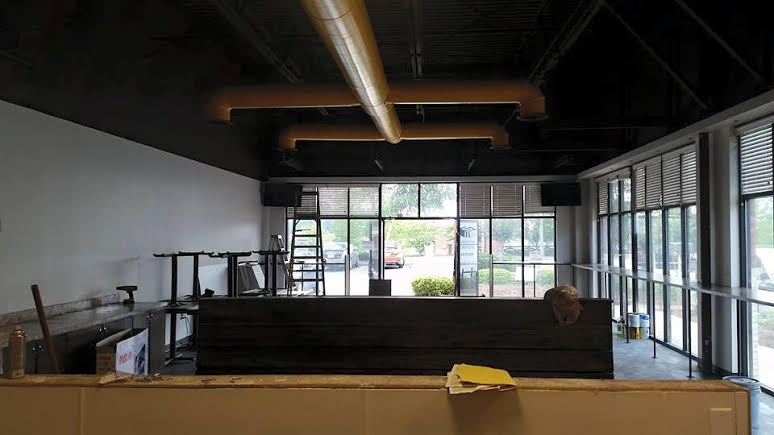 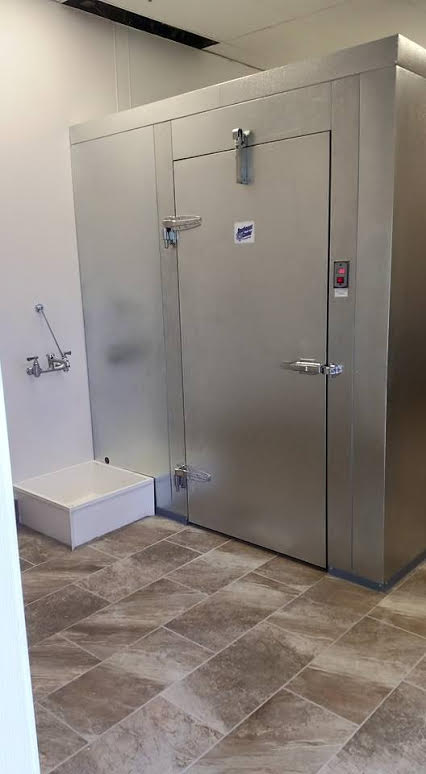 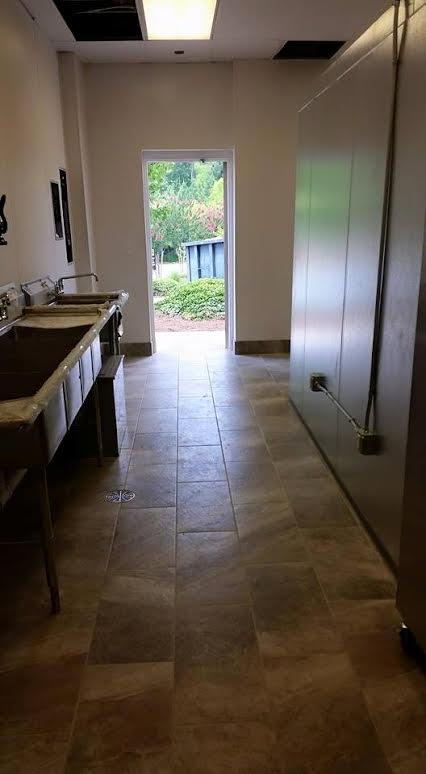 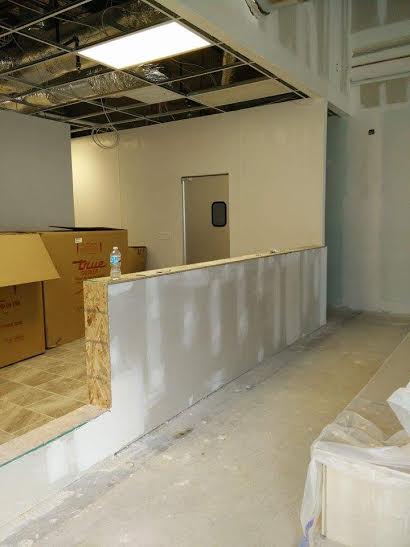 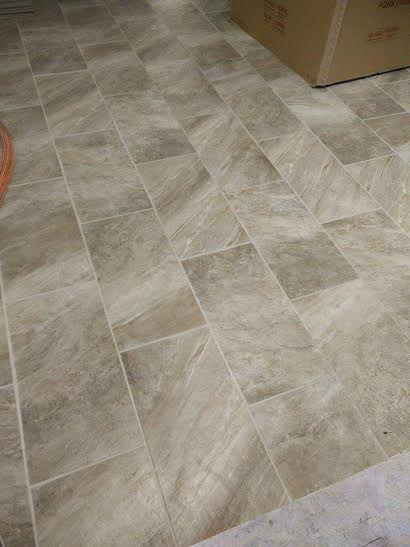